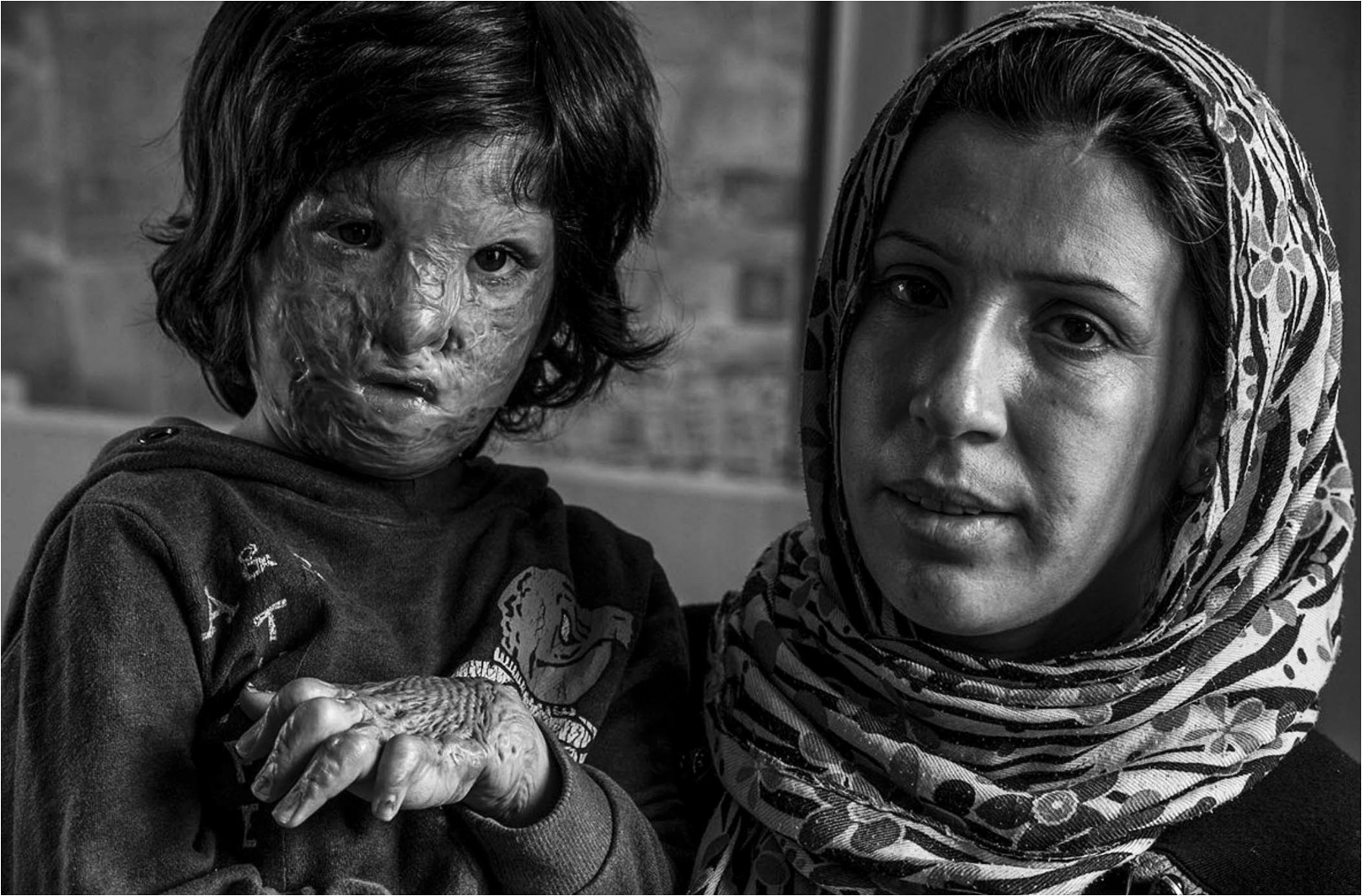 Syria
Every conflict and humanitarian photographer has taken an image or images that refuse to leave his or her memory. Little Aya is one of far too many irrevocably locked forever in my consciousness .
Six-year-old Aya (Arabic for Miracle) was in the kitchen with her mother and younger sister helping prepare an evening meal for the family. Due to the war in Syria, her family could not afford a gas cylinder for cooking. The only source of fuel being old and highly volatile kerosene in fragile glass jars.The kerosene jar exploded engulfing Aye. She suffered the most terrible and excruciatingly painful fourth degree burns on her face, stomach and hands.The family risked their lives and traveled to the Turkish border with Syria. Turkish doctors carried out five surgeries on Aya but said that they had tried their best but could do no more for the little girl.
The horrific burns make it difficult for Aya to see, eat and breath. Her face now brutally disfigured, making her an easy target for name calling and bullying from other children.
Returning to their village in Syria was not an option as the war had intensified, so instead the family fled too the UNHCR Domiz refugee Camp in Kurdistan Iraq.But even in Domiz camp, with improved safety, Aya continues to suffer isolation. Other children do not want to play with her and are scared of her appearance. Aya remains in her tent all the time, ashamed of her appearance, alone and terribly sad.


" We photographers are nothing but a pack of crooks, thieves and voyeurs. We are to be found everywhere we are not wanted ~ We betray secrets that were never entrusted to us, we spy shamelessly on things that are not our business ~ And end up the hoarders of a vast quantity of stolen goods " ~ Brassai

Save The Children UK   working in Liberia,malaria/Mozambique,malnutrition

WOMEN PEACE KEEPERS
To see full photo essay on PBS....
Photos: As roles for female UN peacekeepers grow, so do the dangers

PHOTO ESSAY ~ STARVING IN MALAWI
PHOTO ESSAY ~ SURVIVAL IN SOUTH SUDAN
PHOTO ESSAY ~ DROUGHT IN SOMALIA
PHOTO ESSAY ~ SUMMER IN THE FOREST
LANDSCAPES
On a recent early morning walk on a deserted beach in an area called the 'Panhandle' on the Northern most tip of Cyprus (Turkish occupied area) I was inspired to photograph this wonderful seascape by a long favorite British artist of mine Joseph Mallord William Turner, better known as J.M.W. Turner, was born on April 23, 1775, in Covent Garden, London, England. Turner brought luminosity and Romantic imagery to his subjects and his often violent seascapes. His work—initially realistic—became more fluid and poetic, and is now regarded as a predecessor to Impressionism. Turner died on December 19, 1851, in Cheyne Walk, Chelsea, London, England.
Photography Sebastian Rich/All rights reserved
DANCE
THE BELLS OF AMSTERDAM
C'EST LA VIE
INTERVIEWS/PUBLICATIONS
**BLACK AND WHITE PRINTS AVAILABLE**
**COLOUR PRINTS AVAILABLE**