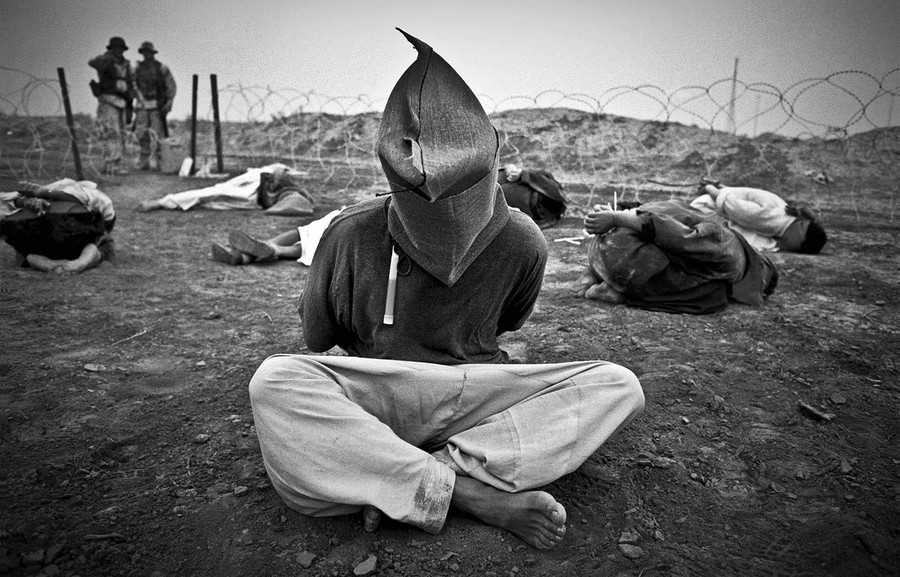 Sebastian Rich: War and Peace Captured Through the Same Lens.
By ~ Natja Igney for

TO VIEW THIS ARTICLE IN ITS ORIGINAL FORMAT IN RIVIERA BUZZ MAGAZINE PLEASE CLICK LINK BELOW. 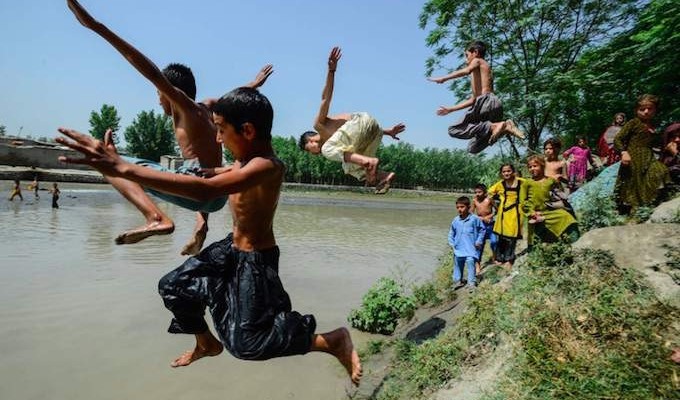 Sometimes, what seems to be a debilitating handicap can be successfully turned into one’s greatest asset.

To those who have a passion for news photography and documentaries, Sebastian Rich needs no introduction. He is the author of some of the most iconic contemporary imagery from war and conflict zones around the world. His work has earned him multiple prestigious awards and the respect of his peers in the media and his fans in public. And yet, his start in life was pretty rough and nothing indicated that he would distinguish himself the way he did…..

The reason? Sebastian’s severe dyslexia. Back when he grew up in London in the Beatles era, teachers equated dyslexia with intellectual incapacity, and their harsh judgment impacted the teenager to the point that he ran off from school at age 16. Instead of books and writing, he turned to a camera as a way of expressing himself. And then one day, opportunity – in the form of Northern Irish Ulster TV – would knock on his door and ask if he were interested in shooting some news, more specifically some of the violence in Belfast. Sebastian who hitherto had mostly done fashion photography, hopped on a plane to Northern Ireland, took a crash course, and was let loose. And the immediacy of news, the challenge to capture the perfect picture, the momentous motion, to tell the story, fascinated the young man….. and became his calling.

Since then, over the course of his 40 year career, Sebastian Rich has worked extensively not just for news media but also for humanitarian organizations such as UNICEF and the United Nation Refugee Agency UNHCR. He has covered every major conflict around the world: El Salvador, Northern Ireland, Afghanistan, Sudan, Ethiopia, Lebanon, The Gulf, Bosnia, Palestine, Iraq. 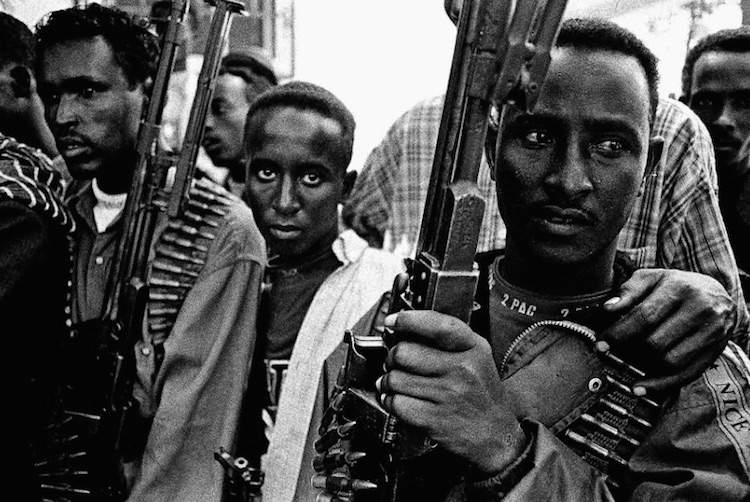 Among the horrors he has witnessed in the field, Bosnia left the greatest impact on him, when he saw his best friend being killed right in front of his very eyes, and others severely mutilated. He himself was injured, shot at, kidnapped, held hostage, and mock-executed. “I have lost most of the hearing in my right ear and 30 percent of the vision in my right eye – courtesy of a Serbian sniper with a high velocity rifle. Obviously, not a very good sniper, otherwise I would not be telling the tale, but good enough to cripple,” he states matter-of-factedly but not without fine self-mockery. His own experience informs his view through the lens, and his work is particularly noted for his poignant portrayal of suffering children. 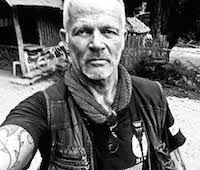 Startling as they are though, Sebastian’s photos are not sensationalist blood and gore dripping front page material but instead capture pride and dignity more than anything else. “It’s the only thing left when someone has lost everything else,” he states.

His prominent colleagues in the media have nothing but the highest recognition for his skills: “Sebastian is probably the finest photographer and cameraman of his time, his camera works is among the most sensitive I’ve ever witnessed,” according to Jon Snow, eminent anchor of Channel 4 News in Britain. And author and film producer Clare Doole adds, “Someone once said that getting Sebastian to make a video or take photographs for you was like getting da Vinci to paint your bathroom.”

Although praise from such illustrious personalities pleases Sebastian, it does not make a down-to-earth man like him vain. “The reality is, it’s even much worse on the ground than what is actually reported in the media. The horror these locals live daily, bring you back into reality,” he says.

But Sebastian deals with trauma by simply “getting on”, and by looking for beauty and lightheartedness in the middle of chaos. That philosophy is perfectly captured in a recent image: Wherever he goes, he tries to communicate with locals in their own language. In Afghanistan recently, breaking out his precious few words of Pashtun, his accent made a local girl laugh out so loud that you can almost “hear” it in the photo Sebastian captured for eternity: 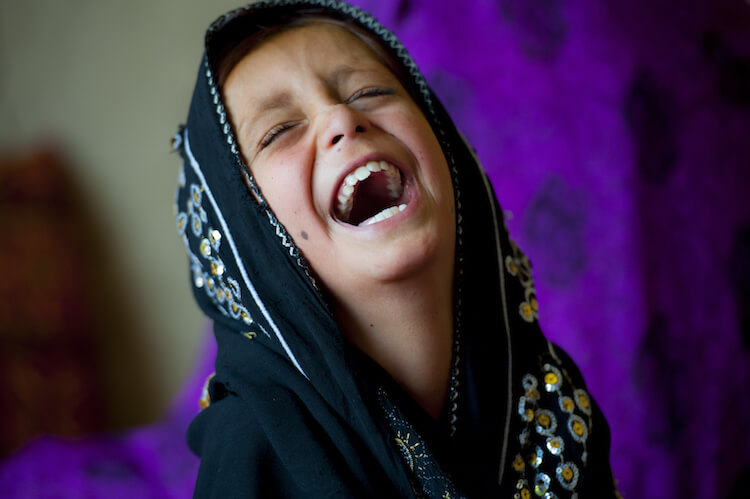 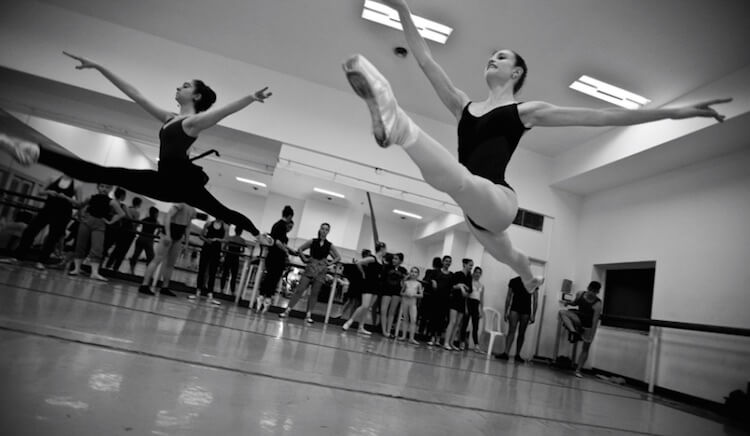 And, possibly as another way to cope with the harsh reality of his job, another field has recently captured Sebastian’s interest, which is quite the stark contrast from war: ballet. He tried his hand at photographing it “because dance is pretty”, but realized he had no idea how to capture the movement and got frustrated, even angry at himself. So he just watched for a while until one day he saw two ballerinas untie their shoes. Their bloodied feet reminded him of war photography. He realized that “like in war, the moment is essential. That’s the commonality. But dance is life, the antithesis of death.” And since then, he has been known as the “photographer of war and occasionally of peace.”

For all his experiences, on and off battlefields, Sebastian has retained a rare sensitivity to the human side of the story. He sees people, not objects, when he takes photos, and he can still be touched to the core:

“Recently, in a camp managed by the United Nations refugee agency in Maban County, South Sudan, a young girl of about seven years followed me around as I photographed daily life. Every now and then a tiny warm hand would hold me gently by the wrist.

I looked down to see her studying the [tattoos of] butterflies on my arm. I asked my interpreter Mohammad what she was saying, to which he replied: “It is nothing Sebastian, just silly children’s things.” I persisted and eventually Mohammad, somewhat embarrassed, told me. “She is saying it is so dirty in the camp with all the dust that she would like to take the butterflies from your arms and put them in her pockets to keep the wings clean and soft!”

I stopped in my tracks. I have seen so much horror in my time as a photographer and most of it, thankfully as a self-preservation mechanism, has been filtered out, but this little girl’s innocence caused my world for a few minutes to crumble around me.”

His disability of near-functional illiteracy aside, he expresses his emotions in poetry as powerful as his photos: 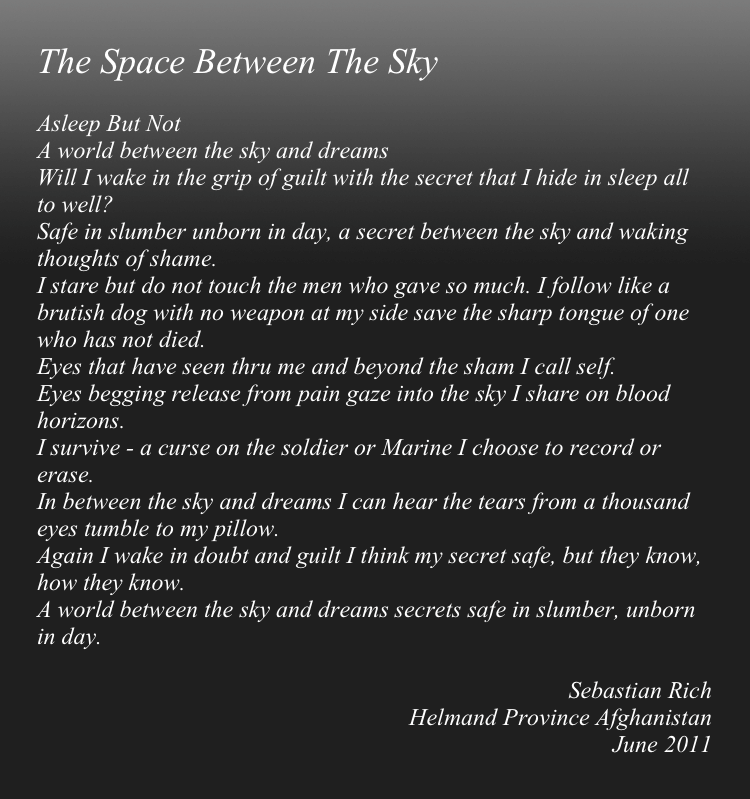 Sebastian’s work – both of war and of peace – has been featured in many prestigious exhibitions but he dismisses his notoriety. “I do like to share my work,  but I want an exhibit to be an opportunity to educate, to engage in a Q&A with the audience.” Part of that may have to do with the fact that media reporting on war has changed over time and despite the flood of front line reporting, the quality of the information has significantly decreased. Given that so many journalists are injured, abducted or even killed in the line of duty, he also wants to draw awareness to the fact that while in the past, reporters used to be welcomed as “friends” to locals, they are now perceived as enemies as they probe and uncover more than ever, and “no one wants to be caught doing bad things,” Sebastian shares.

Still, neither his own experiences nor the inherent risk of his work can stop him from continuing to follow his deep passion for eternalizing riveting moments…. moments of horror but also of hope and aesthetics. Does one like him still have dreams? “Why yes of course! Mine is to set up photographic workshops for refugee children to be able to explore their own thoughts, experiences and view of life through photography. learning new skills and to be able to express themselves in a supportive and safe environment.”

Next, Sebastian is off to Iran and Somalia. His life’s philosophy is therefore neatly summed up in the quote attributed to Mark Twain, “Better to remain silent and be thought a fool than to speak and to remove all doubt.” Instead of writing, he lets his camera do the talking, guiding it to tell the stories that so desperately need to be told, and to show that even in the midst of suffering, there is always a glimmer of beauty and humanity. 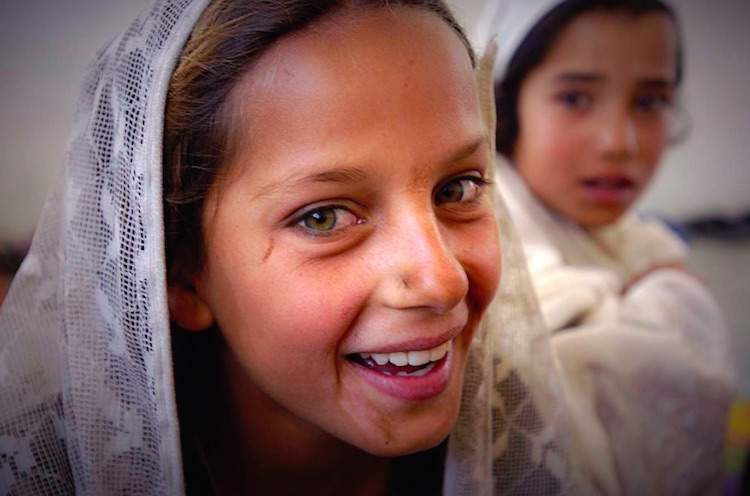 All photographs courtesy and © All Rights Reserved Sebastian Rich

Natja Igney is a freelance journalist and senior global communications strategist with 1021 Global Communications Consulting. She has a particular interest in theater and film-making.

All Posts
Previous
Next