THE CHILD SOLDIERS OF SOUTH SUDAN 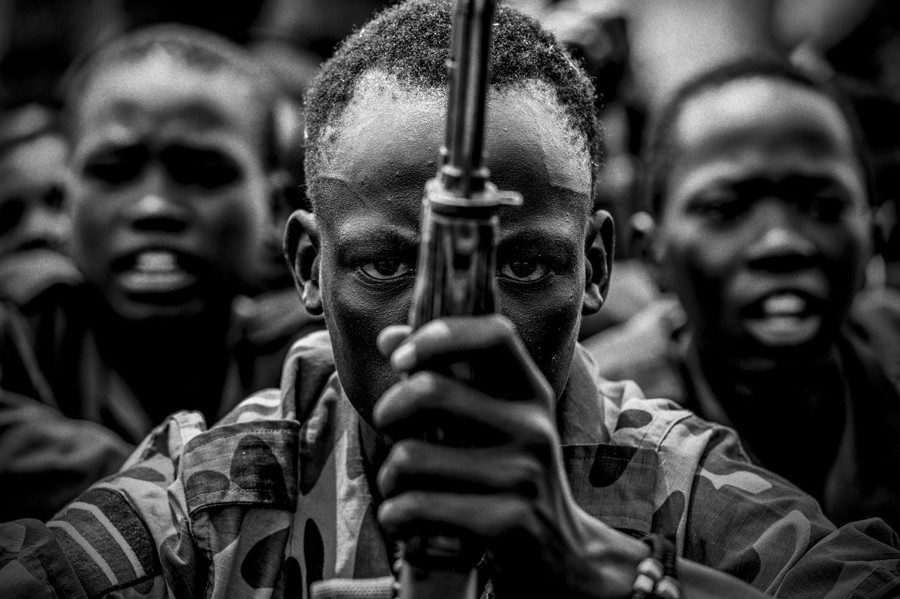 After months of negotiations, 300 war-weary children handed over by the Cobra faction to UN children's agency.

By Sebastian Rich for Al Jazeera

Pibor, South Sudan - In the relative cool shade provided by two giant water-starved trees in the unforgiving South Sudanese bush sits patiently a large disheveled group of children. Sitting in front of them are an earnest group of adults.

On approaching this group you could be forgiven for thinking this was a field trip undertaken by a local school. It's not until you get a little closer that you notice that most of these children are carrying high velocity automatic weapons.

A little unnerving seeing such weapons in such tiny hands.

The warring Cobra faction, after months of delicate negotiations, were in the process of handing over 300 war-weary child soldiers to the care of UNICEF.

With a few suspicious frowns, but mostly in good spirits, the boys laid down their automatic weapons under the watchful eyes of the SPLA (Sudanese Peoples Army), local police, UNICEF and the Guvnor of Pibor.

When asked what they wanted to do as soon as they had freedom, the most common answer was, overwhelmingly: "I want to go to school and learn everything I can."

More than 12,000 children are currently being used by armed forces and armed groups on both sides of the conflict in South Sudan. Ultimately, an estimated 3,000 child soldiers between the ages of eight and 17 will be released to the care of UNICEF and its partners.

Those organisations are supporting the children being released by the Cobra Faction with immediate interim care – food, shelter, clothing and basic health care – as well as tracing the families of these children so that they can be assisted to return to their families and communities. The children will also receive support counselling and much needed psycho-social support.

UNICEF will extend this support to an additional 3,000 girls and boys in the communities to which the released children will return.

But freedom for these now ex-child soldiers does not come cheap. The costs for the release and reintegration of each child is approximately $2,330 for 24 months. UNICEF is appealing for $13 million to fund the immediate needs of the released children and the vulnerable communities where they live.

After the ceremony at which they laid down their weapons, the children exchanged their uniforms for new civilian clothes provided by UNICEF.

One of the boys looked at a bright, brand-new pink shirt that had been offered in replacement for his tattered battle fatigues and said: "This colour is for girls, but its so comfortable."

With a shrug and a smile he walked in the direction of Pibor village to start a new life and the chance be a child once again. SEBASTIAN RICH
All Posts
Previous
Next